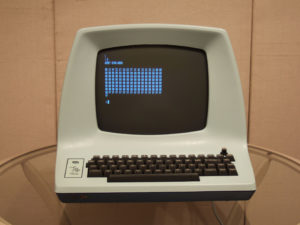 The ADM-3A was an influential early video display terminal, introduced in 1976. It was manufactured by Lear Siegler and had a 12-inch screen displaying 12 or 24 lines of 80 characters. It set a new industry low single unit price of $995. Its “dumb terminal” nickname came from some of the original trade publication advertisements.It quickly became commercially successful because of the rapid increase of computer communications speeds, and because of new minicomputer systems released to the market which required inexpensive operator consoles. [Wikipedia]

I first used it while I was at Berkeley.  There were several dozen 3As connected to a PDP-11/70 running Unix and one of the earliest laser printers.  I attended a seminar/class given by Bill Joy on using ed, sed as possibly vi for word processing.